Evaluation of Satisfaction Level of Sickle Cell Disease Patients Regarding the Healthcare Services in Bahrain: A Cross-sectional Study

Background and objective: Sickle cell disease (SCD) has a relatively higher incidence in the Kingdom of Bahrain. The disease causes frequent crisis that may require hospitalization. The study aimed to evaluate the satisfaction level of SCD patients regarding the healthcare services provided in Bahrain.

Methods: This cross-sectional study with a random convenience sample was conducted in the Medical and Surgical wards, SCD clinics, and the Hereditary Blood Diseases center at Salmaniya Medical Complex (SMC) during May 2015–April 2016. The Patient Satisfaction Questionnaire short form (PSQ)-18 was used in this study, and it was double translated to an Arabic version. SPSS 21 software, Microsoft excel 2010, and chi-square test were used to analyze data as well as measure P value.

Results: The overall satisfaction rate regarding the healthcare services provided to SCD patients was 22% and 17% among males and females, respectively. Patients with higher education level had less satisfaction rate (43%). Moreover, patients stated that they waited for long duration to get the emergency treatment, whether it was in the Emergency department (88%), Hereditary Blood Diseases center (73%), or the Health center (63%).

Sickle cell disease (SCD) is an inherited condition that is widely distributed worldwide and in the Middle Eastern Arab countries, particularly where malaria was endemic in the last century.1 The Kingdom of Bahrain was one of the many countries inflicted with the disease as a result of heterozygous advantage of sickle cell carriers. Previous studies implicate that the prevalence of hemoglobin S (HbS) mutation has increased, especially with the presence of malaria. Further, HbS heterozygotes (carriers) have a higher level of survival and are at an increased risk of passing their genes to their offspring and, thus increasing the HbS gene level. This heterozygote advantage is attributed to a number of biochemical and immune-mediated mechanisms, due to which sickle cell carriers are immune against malaria. Also, studies showed that population migration affected the HbS gene distribution.1

In Bahrain, the Saudi-Indian haplotype was the most prevalent haplotype in SCD patients.1 SCD is caused by a mutated gene in the β-chain of hemoglobin, which leads to red blood cells (RBCs) sickling. This results in obstruction of blood vessels that is associated with mild to severe clinical presentations, including acute episodes of pain that is variable in degree and frequency. Vaso-occlusive crisis is one of the major consequences of SCD, which may mask other life-threating complications, such as acute chest syndrome, acute multi-organ failure, acute splenic or hepatic sequestration crises, and sudden death syndrome.1

In the Kingdom of Bahrain, SCD is a public health priority as it has a relatively higher incidence, which was estimated to be around 5,000 cases in 2005.2 In 1992, screening of pregnant women by the national committee was started, followed by newborn testing if the mother was a carrier.3 In 1993, the Ministry of Health (MOH) launched the premarital counseling service in all health centers,3 however it was optional until a royal decree enacted Law number 11 for the year 2004 requiring mandatory premarital counselling for couples wishing to marry.4 And in 2007, a newborn screening program for hematological disorders was formed.5 And by July 5th 2015, a new daycare unit was opened in the Kingdom of Bahrain to treat sickle cell patients and its aim was to reduce the waiting line in Salmaniya Medical Complex (SMC).6

A study was conducted among adult SCD patients in Baltimore (Maryland, USA) and London (UK) to measure patients’ satisfaction rate regarding the healthcare services provided. It revealed that the level of satisfaction was influenced by the degree of respect and trust between the healthcare providers and the patients.7 Another study highlighted the importance of involving patients in decision making as most of the patients were dissatisfied due to the hardship of sharing their ideas, anxieties, and concerns with doctors and nurses.8 A crosssectional survey reported better communication by the healthcare provider were significantly associated with higher levels of trust towards the medical profession.9 A British study criticized the role of the organization and delivery of management for the pain of a sickle cell crisis as it plays a part in discouraging self-reliance and encouraging hospital dependence. It also advised the models of care to recognize the chronic nature of sickle cell disorders and give priority to patients’ involvement in their care.10

According to our knowledge, no similar studies were conducted in Bahrain. The objective of this study is to evaluate the satisfaction of SCD patients with healthcare services and to determine the actions and methods that could increase their satisfaction levels. SCD had dominated the press headlines during the last years, highlighting the issues related to the quality of healthcare services received by the patients in the last few years.

This is a cross-sectional study conducted from May 2015 to April 2016. It was ethically approved by the Ministry of Health in Bahrain and the Research Ethics Committee of the Royal College of Surgeons in Ireland and Medical University of Bahrain.

The hospital is known to have the largest bed capacity for SCD patients in Bahrain. An informed consent was obtained from the patients by the investigators to fill a validated questionnaire called the Patient Satisfaction Questionnaire short form (PSQ-18).11 The questionnaire is composed of 18 questions indicating patients’ overall satisfaction with healthcare services and was double translated to an Arabic version.

In this study, a random convenient sample of 196 SCD patients (149 males and 47 females) were enrolled from SCD clinic, Medical wards, Surgical wards, and Hereditary Blood Diseases center. The sample size was deduced via online sample size calculator with a confidence level of 95% and a confidence interval of 8. The inclusion criteria were patients older than 18 years, Arabic speakers, patients comfortable enough to answer the questionnaire, adults, and mentally noncompromised individuals. The patients were given the option to either self-complete PSQ-18 scale or to be interviewed by the researchers. The exclusion criteria were all patients who presented with acute crisis, intellectual disability, and any patient who was unable to complete the questionnaire.

A total of 196 patients with SCD were enrolled in this study; two patients with missing data were excluded. There was a male preponderance 76%, with only 24% females. Most of the participants (47%) were aged between 18 and 29 years, whereas only 3.5% were older than 59 years. The sample was equally divided into married and single patients. Majority of the patients (60%) had school degree or were still studying, 33% were college students, 4% had higher education, and only 2.5% were illiterate (Table 1).

The results of the questionnaire assessed in the research are shown in Table 2. Less than half (46%) of the patients agreed that the health care providers were good at explaining the purpose of the medical tests conducted for them. Moreover, most of the patients (67%) reported that healthcare providers treated them in a very friendly and courteous manner, while only 15% disagreed and 18% were uncertain. Furthermore, 60% of the SCD patients were financially satisfied by the healthcare provided to them.

On the other hand, the majority of the patients stated that they had to wait for a long duration to get the emergency treatment needed, whether it was in the Emergency department (88%), Hereditary Blood Diseases center (73%), or the Health center (63%). 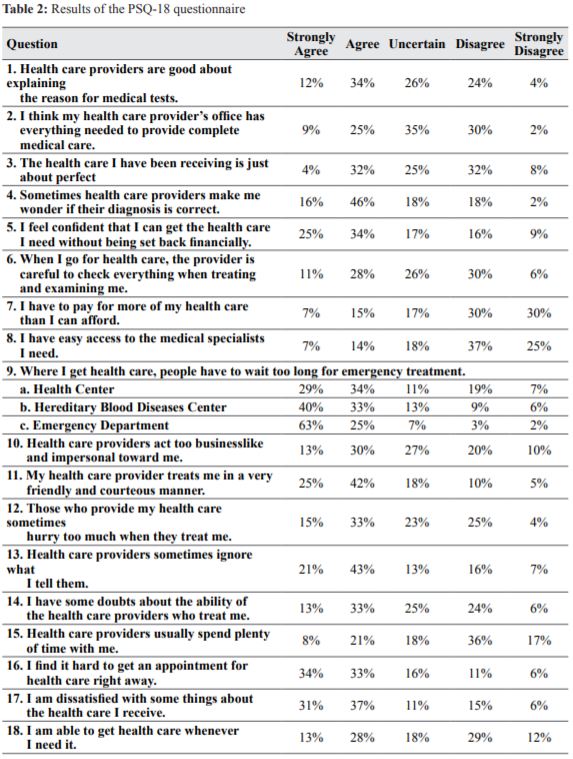 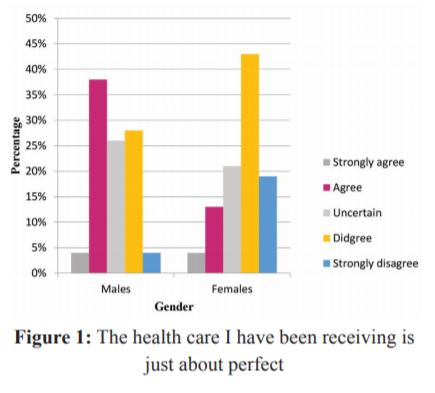 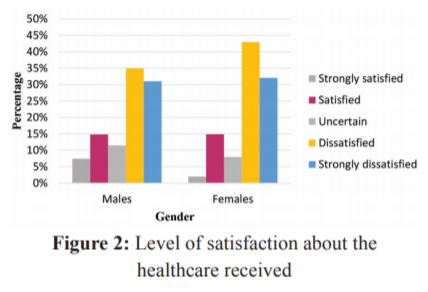 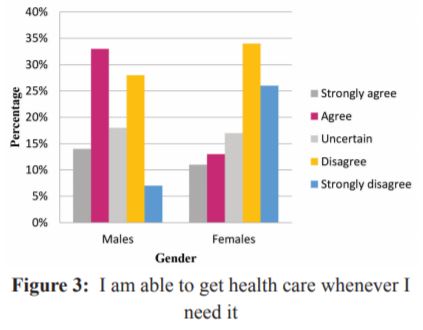 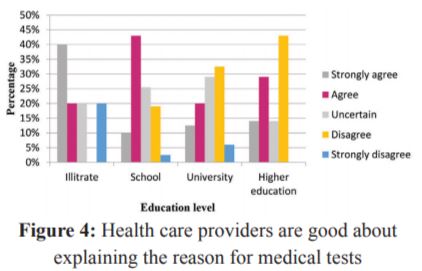 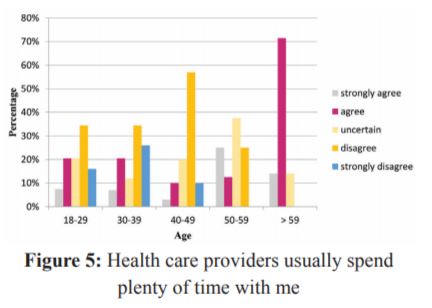 Increasing the patients’ satisfaction is a main goal for health services, worldwide. In 1994, a medical literature that integrated “patient satisfaction” had reached over 1000 papers annually1 reflecting the change in the direction and aim of the healthcare services. It also became a factor in determining healthcare management. The overall satisfaction level is affected by many factors, such as gender, age, level of education, doctor-patient relationship, and waiting duration.12

A cohort study reported that treating patients with respect has more influence on pain management ratings in the Emergency department than the time of administration of initial analgesia, number of analgesic doses, and discharge disposition.5 In our study, although, most of the patients agreed that the healthcare providers have been treating them with respect and in a courteous manner, they were still dissatisfied due to the long duration of waiting. Also, that may have encouraged a smaller number of patients to seek medical services in private centers. It is worth mentioning that a fully equipped multidisciplinary service is provided to all SCD patients for free at the public hospital where the study had been conducted (SMC) and in all primary healthcare centers distributed all over the country. Moreover, another study conducted in the USA showed that many SCD patients avoided going to the Emergency department due to the inadequate treatment they received there and due to the deficiency of knowledgeable providers.13 However, in Bahrain most of the medical staff are highly knowledgeable about SCD and follow the National Emergency Treatment guidelines.14

Gender differences in satisfaction level is of great interest. Although, there is a gap between the sample size of females as compared to males, dissatisfaction among females is more pronounced. This can be explained by the disproportional sample sizes and the fact that each gender has somehow a different route of admission at the SMC. While males tend to be mainly admitted through the Hereditary Blood Diseases center, the females are admitted through the Emergency department only as there are no allocated female wards in the Hereditary Blood Diseases center, yet. And, hence the longer durations of waiting. Unfortunately, we don’t have any data to verify this hypothesis.

Regarding the time spent with each patient, the elderly group were satisfied with the time the doctors spent with them. Although, this result was statistically significant, a study should be conducted in a larger group of elderly patients to confirm this finding as elderly patients contributed a small proportion of the study sample. However, several studies have reported similar findings as they have found that the level of satisfaction increases with age.15, 16, 17

The overall satisfaction level among patients with SCD was fair. The educational level had an inverse relation with the level of satisfaction. The majority the of participants were dissatisfied with the long  waiting duration before they received the needed care. We believe that reducing the waiting time will help in improving the satisfaction level. Further, we recommend that future studies recruit samples with equal gender distribution and evaluate the association between pain intensity and patients’ satisfaction.