Screen-Based Media Use Among Children of Working Mothers and Homemakers

Background and objectives: In recent times, use of screen-based media (SBM) has increased due to the growing availability of screen-based electronic devices in everyday life. The aim of the study is to evaluate the use of SBM among children of working mothers in comparison to homemakers.

Methods: The present cross-sectional study involved 200 children to study the SBM usage. The children were divided into two equal groups: group 1 included working mothers (n=100) and group 2 included homemakers (n=100). The data, including the type of SBM, the duration, and each child’s reaction to the devices being withheld were obtained by direct interview through a predesigned form.

Conclusion: Children of working women tend to use SBM, probably overuse the social media, in comparison to children of homemakers. Children of both, working mothers and homemakers spent time that exceeded the recommended two hours per day rule by the American Pediatric Association SBM use guidelines. Future research should focus on SBM parental strategies and their SBM use.

Screen-based media (SBM) has become a popular method of social interaction and communication among typically developed children and adolescents.1 The term SBM is used, henceforth, to refer to television, electronic tablets, videogames, and smartphones. The widespread use of smartphone is attributed to its portability and similarity to television, due to which it is a potent “distraction tool”, so much so that most mothers emphasize on setting rules and restrictions for smartphone use.2

National Health and Nutrition Examination Survey in US during 2001–2006 revealed that 47% children spent two hours per day viewing SBM.3 In a recent study among young children, television viewing was recorded to an average at 2.9 hours per day.4 Furthermore, two Canadian studies showed that youth spent at least three hours per day watching screen, and children at a risk of psychiatric disorders spent one third of their daytime watching screens.5, 6 With increasing use of videogames among the adolescent population, a new pathological pattern of play has emerged.7 A 2-year long follow-up longitudinal study among youth and SBM use revealed an association of pathological gaming with negative outcomes, such as poor school performance, depression, anxiety, and social phobia.8 Previous studies have incriminated excessive SBM use and the correlated negative effects on socialization skills, attentiveness, school performance, sleep, and weight control.9-11 Public research demonstrated a 25% increase in the rate of internet overuse in the general population, which was best correlated with psychopathology, such as attention deficit hyperactivity disorders, autism spectrum disorder, and loneliness in children.12 In addition, unrestricted access and relaxed parental roles regarding playing videogames were related to the emergence of oppositional behavior problems among children with autism.13 The effect of SBM use is not necessarily always negative; for example, adolescents with autism spectrum disorders who watch television with their parents reported a more positive parent-child relationship, and those who received emails from friends reported a positive effect on those corresponding friendships.14

This cross-sectional study was conducted between September and November 2018. Working mothers, typically having children aged 4–16 years were recruited from four health-related sites in the Kingdom of Bahrain: Psychiatric Hospital (n=55), School Health (n=10), Al Wafa Center for Autism (n=27), and College of Medicine and Medical Sciences (n=8). No exclusion criteria were applicable. None of the targeted mothers refused to participate in the study. An equal number of homemaker mothers (n=100) participated in the study that examined the SBM use among children with autism spectrum disorder, attention deficit hyperactivity disorder, and their typically developed siblings.

Informed written consent for participation in the study was obtained before data collection. The ethical approval was obtained from the Executive Committee, Bahrain Association of Intellectual Disability and Autism (BAIDA).

Working mothers were interviewed face-to-face by research assistants. They were asked to complete a data collection form in the Arabic language, which was specifically designed for the study. The form focused on seeking information on the mother’s age, employment, education, and seven questions regarding their child’s SBM use: whether their child used televisions, tablets, smartphones and/or videogames; the duration spent on each screen type, in hours per day; and finally, what their reactions were to removal of the screens. The form takes 5–7 minutes for completion. The results were compared with that of homemakers who participated in a similar study, using the same protocol of data collection.

After the results of the study was gathered, it was presented to a focus group of five working mothers and five homemakers that the authors believed had valuable insight on the topic and may assist in its interpretation.

Data was recorded in SPSS 22. Descriptive statistics were summarized for the demographic characteristics and outcome measures. The mean and standard deviation (SD) were reported for continuous variables and count and percentage were reported for categorical variables. Pearson’s correlation, chi-square test, or Fisher’s exact test and independent t test were used to investigate the differences between the groups. 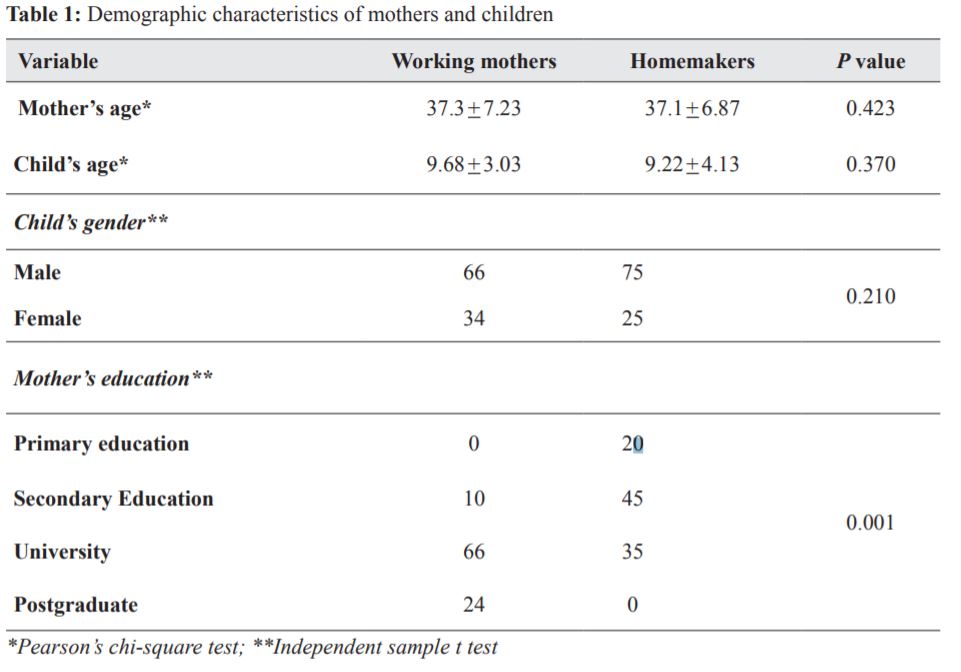 The use of SBM in both groups is depicted in Table 2. Children of homemakers viewed significantly more television than children of working mothers (92% vs. 77%; P=0.006). There was no difference in the usage of tablets, smartphones, and videogames in both groups.

Table 4 shows the children’s reactions to withheld screens. Children of working mothers significantly reacted with sadness (P=0.019), irritability (P=0.000), and violent behavior (P=0.0001). Both groups of children had a similar score on the “crying loudly” type of reaction.

In this explorative cross-sectional study, the mean age of mothers and children in both groups was similar, which makes the comparison between the groups feasible. As expected, the mother’s education level was significantly higher for working participants with a university education.

The researchers in this study proved the initial hypothesis that SBM use is more frequently observed among children of working mothers in terms of type, duration of time spent, and overuse judged by the reaction to screen removal. The only exception was that children of homemakers watched television significantly more than any other screen type. This finding could be explained on the basis that television is a major source of information to homemakers. In addition, homemakers can have time to enjoy watching television with their children; it is plausible that children look forward to an enjoyable shared activity with their mothers. However, working mothers on the other hand obtain information from internet devices and may encourage their children to do the same. Working mothers advise their children to do homework with the help of internet-linked screens. These explanations gained support from focus group findings that included an equal number of homemakers and working mothers. Unfortunately, the results of this study could not be compared with other similar studies that focused on the same target group, whether in this region or from published literatures, due to unavailability.

Another interesting finding that has value, clinically and in terms of public awareness, was that children at a mean age of nine years used SBM above the threshold time suggested by the American Pediatric Association, which is two hours per day for the covered age group.16 The time spent on SBM by children of working mothers was even significantly more in comparison with children of homemakers. Indeed, if such difference is related to parental mediation of television viewing and video gaming or inadequate parental supervision then it reflects internet use for educational or social purposes by working mothers, which needs to be investigated further. Previous research on typically developed children and adolescents documented that parental controlling of media use was influenced by media content and had a moderate influence on negative media effects.17-19 Unfortunately, parental SBM use and their mediating role were not part of the objectives of this study. This should be explored in the future by interested researchers in this field. This issue is particularly relevant for a cross-cultural comparison.

There is widespread belief among the public that internet use among the general population in the Kingdom of Bahrain is very high and that it exceeds the global rate, an issue that has never been confirmed or refuted. The prevalence of SBM use among the general population is another area that may require special consideration in the future. The fact that children of working mothers spent more time on SBM is not an entirely negative matter. One should investigate what way and what for it was used, and if mothers are concerned about such behavior.

In a recent study, the authors found that the majority of mothers felt they needed to set restrictions for the use of SBM, but others, on the other hand, felt that SBM are also a necessary and unavoidable part of their life.20 A qualitative study, conducted in six European Countries, concluded that parents do not have concerns over their child’s SBM use.21 In addition, it is common to find that school, and educational and parenting websites recommend the use of SBM with preschool children as an educational tool.22, 23 The use of SBM as an educational tool in preschool settings was found to increase communication, interaction, and independent learning.24 The role of SBM among preschool children is a debatable matter. Therefore, more research is needed in evaluating the potential role of SBM on learning in very young children.

This is an explorative study, which examined variables that did not include parental attitudes and their mediating strategies. Secondly, this study’s small sample size did not allow examination of other cofactors — age distribution, mother’s education, and family income, effectively. Lastly, convenient sampling is not the best sampling technique to study a complex public health problem, such as SBM use. Other methods of collecting data, such as diary recordings, are more valid than using a method that is entirely dependent on each mother’s subjective assessment.

In this explorative study, that looks for baseline information on SBM use among children of working mothers and homemakers using a crosssectional design, revealed that children of working mothers used screens, except for television, more frequently and spent more time daily viewing screens compared to children of homemakers. In both groups, children spent time that exceeded the recommended two hours/day rule by the American Pediatric Association SBM use guidelines. The more time the child spent on screen-based media, the more difficult it is to stop him/her watching these screens. This is just an initial attempt to examine this growing and complex public health problem. Future research should focus on parental strategies used to control SBM use, parental SBM use, and its relationship to children’s internet habits.

This study showed that SBM use is high in schoolgoing children aged 6–12 years. The association between time spent on SBM and its positive and negative effects on children’s health should be addressed. Clinicians, despite clearly lacking a consensus on the definition of internet addiction, should plan and introduce services in their regular clinical work for children and adolescents that overuse the internet to a degree that affects their socialization skills, opportunities to make friendships, and their school performance. The public should be educated through applicable means on the signs and symptoms of pathological use of the internet and its detrimental effects on health, socialization, and school performance of their young children. Evidence-based facts on the negative impact of internet overuse should be made readily available to parents.

Authors would like a thank Dr. Haitham Jahrami for his contribution in statistical analysis.

AA conceived and designed the study. AT helped with data collection and writing the introduction. AA wrote the first draft and both authors provided critical revisions of the manuscript and approved the final version.