Background and objective: The increase in obesity amongst adolescents is one of the most important public health concerns in many countries, including the Kingdom of Bahrain. The objective of the current study was to measure the prevalence of overweight and obesity among Bahraini adolescents. This study will aid in a better understanding of the issue and in pursuing preventive measures and campaigns to alleviate the problem.

Methods: The weight, height, and body mass index of 9057 Bahraini adolescents was obtained from the Ministry of Health via the nation-wide health electronic file—I-Seha. The final sample consisted of 8463 adolescents; of which 4687 and 3776 were female and males, respectively. References standards from the World Health Organization were used to qualify the adolescents into normal weight, underweight, overweight, obese, and morbidly obese.

Conclusion: The prevalence of overweight and obesity is high in adolescents in the Kingdom of Bahrain, especially in the younger age group. This increases the urgency to undertake measures to control the problem in the younger population, in order to reduce serious outcomes.

The increase in overweight and obesity amongst adolescents is one of the most important public health problems in many countries and transitional economies.1-4 There are many clinically significant obesity related consequences, which include the direct correlation with chronic disease, morbidity and mortality, high medical costs, as well as psychological and social costs, such as social isolation and peer issues.5 Recent studies conclude that obesity generally commences early in life and persists into adolescence.6 The persistence of obesity from childhood into adulthood, the scarcity of successful treatment options, the hazards of pharmacologic treatments, and the complexities of treatment guidelines argue for an increased attention to the prevention of excessive weight gain starting as early in life as possible.1, 6-12

While there were several similar reports conducted in the past, the objective of the study is to measure the current prevalence of overweight and obesity amongst the Bahraini adolescents attending primary health care centers in order to attain a better and understanding of the issue. Additionally, this report aims to fill this gap by presenting the most recent findings with a larger sample size— 8463 adolescents. The goal is to use the results as a platform to pursue preventive measures and campaigns to combat the issue since the increase in obesity amongst adolescents has become one of the most important public health problems in many countries, including the Kingdom of Bahrain.

This cross-sectional study was conducted in the Kingdom of Bahrain, which has 27 public primary health centers, distributed amongst five health regions (four governorates).27 Ethical issues have been considered carefully. The data was obtained from the Ministry of Health’s electronic records (I-Seha) with precautions taken to protect the confidentiality of the study sample by protecting any personal identifiable information. Data was obtained after taking the permission of the undersecretary of primary care in the Ministry of health.

Information including vital signs (weight, height, body mass index (BMI), and blood pressure) of all patients visiting all public health centers are recorded in the Nation-wide health electronic record—I-seha. Data, including weight, height, and BMI of adolescents aged 12–15 years, who visited the public health centers between January 2017 and April 2018 were documented through the I-seha system. The adolescents with extreme BMI readings that indicated likelihood of error in BMI records (BMI figures above 100 or below 10), the adolescent with two or more BMI records (only the last record was maintained), and all non-Bahraini adolescents were excluded from the study.

A total of 9057 Bahraini adolescents aged 12– 15 years attending various health centers across the Kingdom of Bahrain were included in the study. Out of these records, 80 were disqualified for being extreme outliers and a further 514 were removed as they are records for repeat visits of the same individual with more than one recorded visit (only the last record was maintained). The sample was further reduced to 8463, of which 4687 and 3776 were females and males, respectively.

The sample was then compiled, filtered, and cross referenced with the WHO standards28 to classify adolescents into normal weight, underweight, thinnest, severely underweight, overweight, obese, and morbid obesity using BMI cut-offs by age and gender (using average reference standards for each age group). According to the WHO reference standards, the classification for each category is as follows:

Using this cross-referenced data, we were able to determine the prevalence of obesity in adolescents as well as analyze the results detailed in this report.

The sample breakdown revealed that 55.4% and 44.6% were females and males, respectively. A larger portion of the sample represented the age group of 13–15 years, as displayed in Table 1. 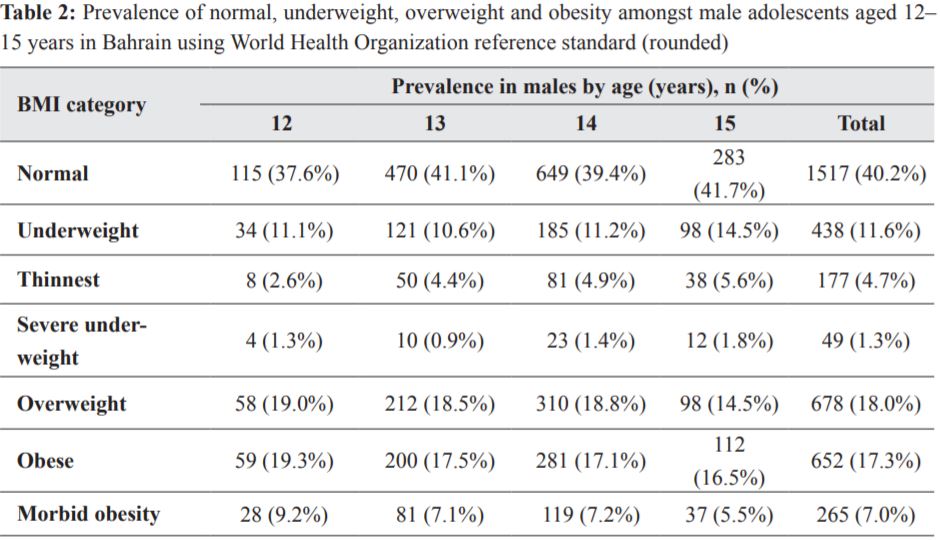 Another observation is that in the newer results, males display a higher percentage of obesity (24.3%) as compared to females (20.7%). This could be attributed to the change in the food consumption patterns with the increase intake of high caloric diet, such as soft drinks and fast food, as well as the physical inactivity. Further, high consumption of food rich in fat and carbohydrates and sedentary lifestyle among countries in the east Mediterranean region plays an important role in increased prevalence of obesity.30 On the other hand, in our study females display a higher percentage of overweight (21.5%) as compared to males (18.0%), which is similar to a study conducted by Al Junaibi. Overweight was higher in females than in males (16.7% vs 11.6%) and obesity was more common among males than females (21.4% vs 18.1%).25 This could be contributed to different factors, one possibility is that obese girls are more motivated to lose weight after puberty than boys as they will be more aware of their body image.31 Additionally, changes in female lifestyles across the region with more tolerance regionally for girls to be physically active have improved figures slightly over the past years.

According to the present study, younger participants have a higher overweight or obese percentage than the older participants. Males aged 12 years (47.4%) were either overweight or obese, while females aged 12years (48.5.0%) were classified as above “normal” weight range. Conversely, male adolescents aged 15 years (36.4%) were either overweight or obese whereas, females aged 15 years (38.3%) were above “normal” weight range. This could be explained by the fact that during adolescence, especially during puberty, girls and boys undergo fat storage and the spurt of height in boys is higher than in girls, the BMI of boys appears to be lower than in girls. Moreover, boys lose fat during puberty faster than girls; whereas, girls store more fat during the spurt of height than the boys, and fat deposition among girls continues through puberty.32

These results confirm the dramatic increase of the global prevalence of overweight and obese adolescents during the past two decades as documented by several studies conducted in different countries worldwide.1 This stresses that obesity has become a global epidemic and a major public health concern due to the serious complications and the huge burden on the community that may arise as a result of this issue.1

Several factors could be related to the increase in the prevalence of overweight and obesity adolescents in the Kingdom of Bahrain. These primarily include socioeconomic factors, such as the growth of the local middle and upper middle class (higher spending power), reduced exercise/movement amongst all age groups driven by dependence on car for commute, changes in lifestyle that display reduced existence of outdoor activities/communities in which adolescents are physically active, and increased indoor activities, such as watching television and online games. In addition, changes in the job market and educational requirements (longer working hours that are primarily office based for parents, which mean lower physical activities with adolescents as well as increased schooling hours) and changes in dietary habits that display increasing dependence on nonhome cooked meals and fast food.21-23

The strengths of this study are the sampling technique employed, which provided access to a large nationwide sample (the largest sample size for a report discussing obesity in the Kingdom of Bahrain). The information was collated in all different medical centers, which eliminates any possible bias in sample selection. The present study is a one of the first to use data collected through I-Seha that may help in forming the basis for future research. The sample was cross referenced according to the WHO standards, which forms a global bench mark to measure obesity globally.

On the other hand, there are a few limitations as well. Only public primary healthcare centers were included, whereas the private sector was not included, which might affect the external validation of our results. Additionally, there is a possibility of inaccurate and incomplete medical records as this data was manually inputted into the system by the doctors and employees in the medical centers. We believe that there are many other factors associated with the significant rise in obesity in the region that need further research, which can be used to enhance the results of this study and other similar studies conducted regionally.

The increased prevalence of overweight and obesity in adolescents in the Kingdom of Bahrain, especially in younger participants, urges to establish effective programs at national level for the prevention, treatment, and to limit the problem and its long-term impact on society. Partnership between the Ministry of Health, healthcare professionals, international agencies, consumers, industries, and media might a play a key role in promoting better health awareness (through nationwide campaigns aimed at educating the public of the issues and proposing solutions/ support to individuals) and increased physical activity while continuing to monitor the results to ensure the effectiveness of the national program. Further, studies are recommended to explore the main causes and factors associated with obesity and overweight among adolescents.

The authors of the study have no conflicts of interest to declare.

We acknowledge the supervision and support of Dr. Manal Al Alawi assistant undersecretary for primary care, and the revision and feedback from DR. Adel Al Sayyad.