Methods: This is a retrospective case-control study, including 35 infants with a prenatal diagnosis of congenital heart defects (CHD). The cases were matched to 35 controls diagnosed postnatally with the same CHD. Demographic, clinical, and procedural variables were collected on a pretested form and compared. Statistical analysis was performed using SPSS 25.0. Contingency tables were created, and the grouped data were compared using the Fisher’s exact test.

Conclusion: Fetal echocardiography aided in identifying neonates with complex CHD resulting in better parental counseling and delivery at a tertiary care center. However, this did not result in significantly short- and intermediate-term outcomes. Due to the small sample size, future follow-up studies are encouraged.

Congenital birth defects (CBD) are the leading cause of infant mortality in developed countries.1 Congenital heart defects (CHD) constitute a major proportion of CBD. It is estimated that CHD contribute to almost one-half of the deaths, both as isolated lesions and as part of other multiple CBD.1

The prevalence of CHD remains static despite modern techniques and technologies to improve the ascertainment of cases.2

Prenatal fetal echocardiography (PFE) is now an accepted and accurate method of diagnosing CHD.3 It improves postnatal outcomes, especially in neonates who require prostaglandin infusion, such as patients with hypoplastic left heart syndrome (HPLHS)4 or transposition of the great arteries (TGA).5 The PFE is typically performed between 18 and 22 weeks of gestation.6 During the scan, a transducer is used to visualize the four-chambers of the heart, as well as the in-flow and out-flow tracts. PFE provides a comprehensive understanding of the structure of the fetal heart and allows identification of abnormalities, particularly, those missed during routine fetal screening.7

The Kingdom of Bahrain has a total population of over 1.2 million (census 2010)8 and the crude birth rate is 15.11/1000 people (2015).9 The latest recorded data validates 20,931 live births in the year 2014.10 According to data collected by the Mohammed bin Khalifa bin Salman Al-Khalifa Cardiac Center, the incidence of CHD is 14.9/1000 live births. To date, no study has been conducted to demonstrate the benefits of prenatal diagnosis of CHD in the Kingdom of Bahrain. Therefore, the study aimed to determine the impact of prenatal diagnoses using PFE on short- and intermediateterm outcomes in a tertiary pediatric cardiac center.

This is a retrospective case-control study, including 35 neonates (cases) born between 2003 and 2018, who underwent PFE and were diagnosed with CHD. The cases were matched with 35 controls with the same type of CHD who were diagnosed postnatally. Due to the retrospective design of the study, ethical approval was not necessary.

This is a retrospective case-control study, including 35 neonates (cases) born between 2003 and 2018, who underwent PFE and were diagnosed with CHD. The cases were matched with 35 controls with the same type of CHD who were diagnosed postnatally. Due to the retrospective design of the study, ethical approval was not necessary.

The data was analyzed using IBM SPSS 25.0; corrected mean values were calculated, where possible. Contingency tables were prepared, and the grouped data were compared using the Fisher’s exact test. The null hypothesis was rejected, if P < 0.05.

Demographic characteristics of cases and controls

The variables, including sex, nationality, maternal age, birthweight, gestational age, and mode of delivery were not significantly different between the cases and controls (Table 1). However, a significant number of prenatally diagnosed neonates were born in a tertiary healthcare center when compared to those diagnosed postnatally (P = 0.030). 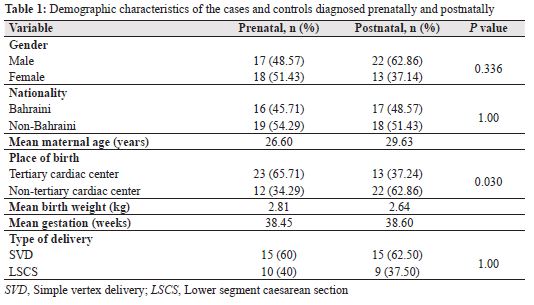 The main non-cardiac traits and/or diagnoses associated with both prenatal and postnatal groups included consanguineous parents, infant of a diabetic mother (IDM), prematurity, and family history of CHD (Table 2). Either of these traits were observed in 21 (60%) prenatally diagnosed and 22 (62.86%) postnatally diagnosed neonates (P = 1.0).

There were 17 different types of primary diagnoses ranging from minor non-critical CHD to critical complex CHD lesions (Figure 1). The mean age at confirmation of diagnosis using postnatal echocardiography in cases and controls was 1 day postnatal and 12.58 days, respectively (P = 0.001). In the prenatal group, patent ductus arteriosus (PDA)- dependent CHD was observed in 13 (41.94%) neonates and were treated with prostaglandins when compared to 9 (28.13%) neonates in the postnatal group (P = 0.3). 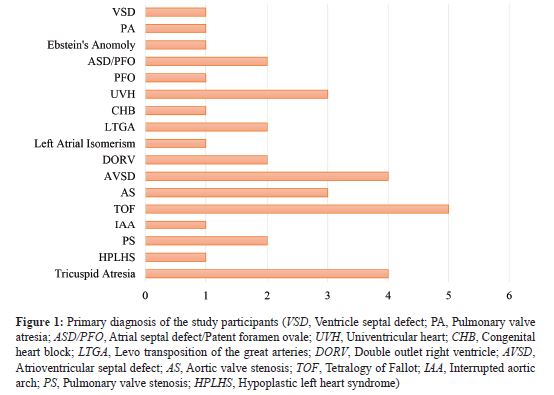 After their first admission, within the first three months of birth, one neonate each in the prenatally and postnatally diagnosed groups died (P = 1.0). One or more cardiac catheter interventional procedures within the first three months of life was observed in 4 (11.4%) and 5 (14.29%; P = 1.0) neonates in cases and controls, respectively. Among the cases and controls, 12 (36.36%) and 10 (28.57%) neonates, respectively, had one or more surgical procedures (P = 0.606) within the first three months of life (Tables 3 and 4). There was no significant difference in the number of readmissions between the two groups, with 1.25 and 1.23 readmissions in the prenatal and the postnatal groups. Equal number of neonates in the prenatal (15; 51.72%) and postnatal (15; 53.57%) groups are no longer on any medications (P = 1.0). 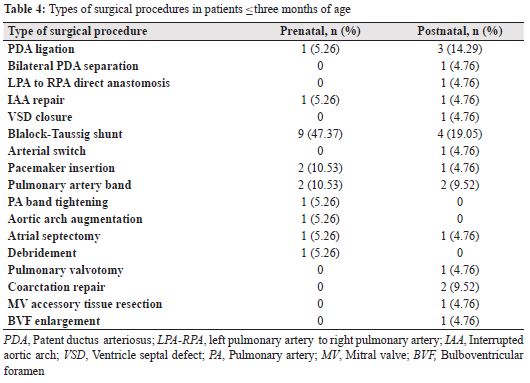 We had hypothesized that a prenatal diagnosis of CHD would lead to an improvement in the postnatal short- and intermediate-term outcomes. However, unexpectedly, our results showed a slightly higher mortality rate, longer hospital stay, and higher rate of prostaglandins use in the prenatally diagnosed group when compared to those diagnosed postnatally. This indicates slightly worse outcomes and proves our primary hypothesis false.

A statistically significant number of the mothers in the prenatal group chose to give birth in the tertiary healthcare center (P = 0.0306). This allowed for better preparation and counselling of the parents, which has shown to improve the psychological impact on the mother, leaving her less likely to blame herself or the neonate’s father for the fetal abnormality.14 It also allowed for better planning and preparation of the time and mode of delivery, as well as NICU awareness.

The present study showed that prenatal diagnosis of CHD allows the multi-disciplinary team to be better prepared for the birth-related complications and to counsel the parents beforehand. This could lead to more admissions to the tertiary healthcare center resulting in improved treatment during pre and postnatal periods. However, this does not reflect a statistically significant improvement in the mortality rates or overall short and intermediateterm outcomes in the Kingdom of Bahrain.

There were several limitations in the study. Due to the retrospective study design, the cardiac database used did not contain all information required for the patients in both the prenatal and postnatal groups. Additionally, it was not possible to calculate P values for the mean values, as the SPSS statistics program required a minimum of 2 × 2 contingency table.

In case of suspicion of any cardiac abnormality during routine gestational ultrasound, the patient should be referred for a detailed fetal echocardiography scan at a tertiary healthcare center to rule out CHD.

Patients diagnosed with complex CHD in the fetal echocardiography scan should have a planned delivery in a tertiary healthcare center. This would ensure the highest level of safety and optimize the stability of the neonate during the perinatal period.

The authors of the study have no conflict of interest to declare.