Side Effects of Daily versus Weekly Iron Supplementation in Pregnant Women

Methods: Seventy-nine pregnant women who met the inclusion and exclusion criteria were given iron supplements every day (group 1, n=37) and twice a week (group 2, n=42). All numerical data were assessed by independent t-test. Side effects were assessed after one month of administration using a questionnaire containing complaints felt by pregnant women and were evaluated by chi-square test using SPSS 25. A P value <0.05 was considered as statistically significant.

Low compliance in consumption of iron in pregnant women mainly because of gastrointestinal side effects, such as nausea, flatulence, abdominal pain, diarrhea, constipation, and black or tarry feces.8 A recent study found that daily iron supplements increase lipid peroxidation9 and reduce zinc absorption.10, 11 Free iron has a pro-oxidizing effect, which catalyzes the formation of free radicals and causes cell damage. Free radical damage and lipid peroxidation are the causes of complications of pregnancy, such as pre-eclampsia12 and intrauterine growth restriction (IUGR).13

This prospective cohort study has been approved by Health Research Ethical Committee, Medical Faculty of Universitas Sumatera Utara/Haji Adam Malik General Hospital (260/TGL/KEPK FK USU-RSUPHAM/2018). The study, involving 79 pregnant women attending Belawan Health Center, was conducted from July 2018 to September 2018 in Medan City—one of the health centers with the highest number of pregnant women in Medan. The effect size of 33% (P1=43%, P2=10%)9 was used to estimate the sample size. Pregnant women who met the inclusion criteria (agreed to be a participant, 12– 28 weeks of gestational age, baseline hemoglobin concentration ≥10.0 g/dl) were given iron supplements every day (group 1, n=37) and twice a week (group 2, n=42). Oral iron supplements administered was tablet ferrous fumarate 180 mg; tradename PaphrosRx. The side effects were listed according to the leaflet of the drugs and explained thoroughly to all the participant to self-administer iron supplements for up to 3 months. Routine blood count, including hemoglobin, hematocrit, and serum ferritin levels was carried out. Side effects listed in the leaflet were assessed after one month of iron administration using a questionnaire containing complaints felt by pregnant women while consuming iron supplements.

All numerical data were assessed by independent t-test. Side effects of iron supplementation in daily and twice-a-week groups were evaluated using chi-square test. All data were analyzed statistically using SPSS 25. A P value < 0.05 was considered as statistically significant. 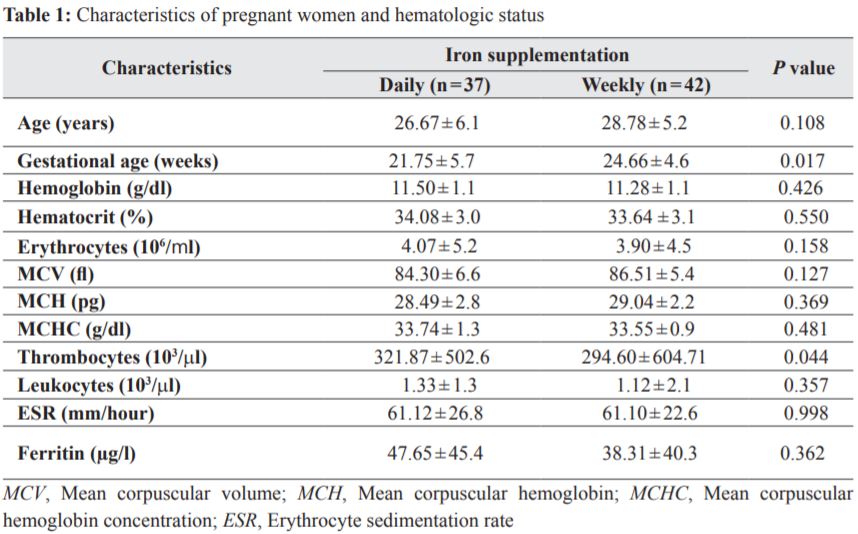 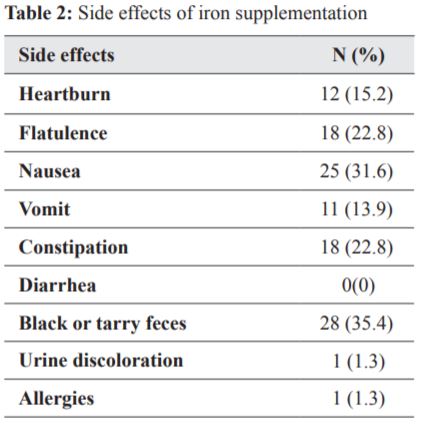 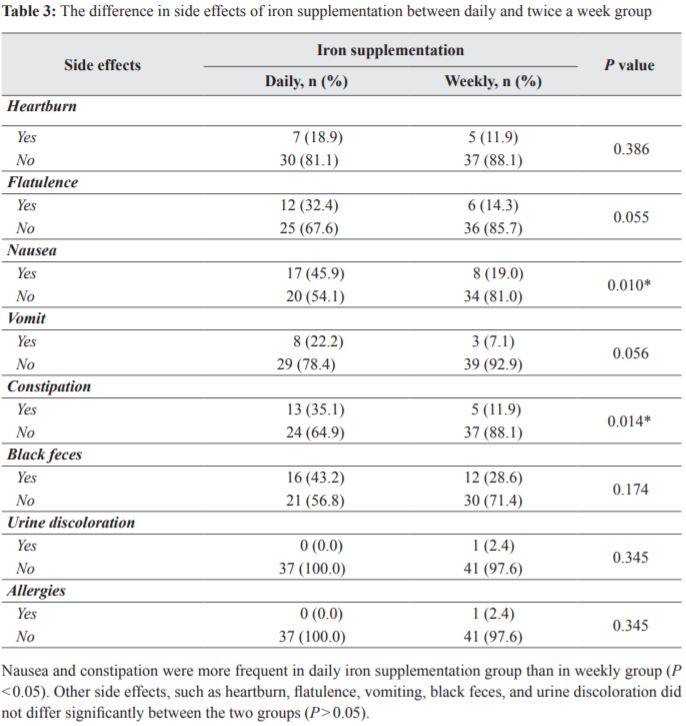 In the present study, urine discoloration was observed in the weekly group, although the result was not significant. The darker color of urine after consuming oral iron supplementation is possibly related to iron metabolism, especially the iron excreted in urine. Deferoxamine is a specific iron chelator that binds to ferric iron forming a water-soluble compound that is rapidly excreted by the kidney. Deferoxamine causes a vin rosé discoloration of the urine as side effect of iron intake. In other words, urine discoloration is a sign of the increasing iron excretion.23 The side effects of oral iron intake are often associated with a higher dose. The high doses of iron supplements have not provided optimal benefit for pregnant women.14

In the current study, among all side effects, nausea and constipation were more frequent in the daily group as compared to the weekly group. Despite no significant difference, flatulence and vomiting were more frequently observed in the daily group than in weekly group. A previous study conducted by Ahmed et al.24 showed that constipation was the most common factor for noncompliance of iron supplementation in pregnant women. Constipation had the highest percentage among all of factors, including nausea, diarrhea, heartburn and vomiting. A controlled trial study by Bilimale et al. found that forgetfulness was the main symptom followed by gastrointestinal symptoms as the side effects for low adherence of iron supplementation. The other symptoms included vomiting, nausea, heartburn, and diarrhea.25 This showed that the side effect would decrease the compliance of iron supplementation.

We would like to thank the Ministry of Research, Technology, and Higher Education for grant funding.